The Benefits of Hyperbaric Chamber Therapy

The Most Exclusive Luxury Rehab Retreat With Most Effective Healing System 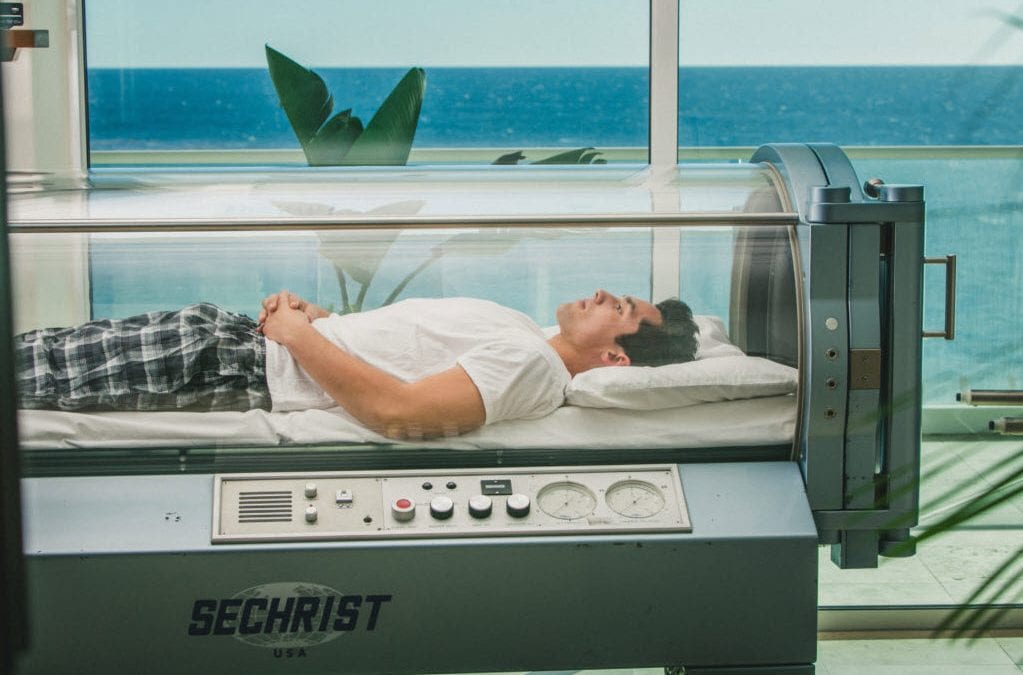 Hyperbaric chamber therapy involves a pressurized tube-like chamber where the patient breathes pure 100% oxygen for a determined amount of time. The process increases the amount of oxygen the blood can carry, this allows the blood to restore normal levels of gas and tissue functions, as well as promote cell regeneration, which encourages a natural healing process and gives the body the tools it needs to fight infections. Hyperbaric oxygen therapy usually requires two to three times the normal environment air pressure level to be effective. The therapy requires continuity in sessions, or a predetermined series of sessions. Depending on the condition being treated, sessions usually last about 1 hour.

Hyperbaric oxygen therapy (HBOT) is medicine’s most efficient method of transporting oxygen to cells throughout the body. When you breathe oxygen at normal atmospheric pressure, it is transported on the hemoglobin in your red blood cells. Under pressure, however, oxygen dissolves in the plasma, cerebrospinal fluid in the brain and spinal cord, lymph, and other body fluids. It is therefore easily delivered to all tissues, and even areas with limited blood flow are afforded the tremendous healing benefits of oxygen.

HBOT also curbs infection, by providing a hostile environment to anaerobic bacteria, which thrive in the absence of oxygen. It promotes the growth of new capillaries and blood vessels to areas with poor circulation for cardiovascular support and boosts collagen formation for faster wound healing. It also mobilizes rejuvenating stem cells. Studies show that after just one HBOT treatment, concentrations of circulating stem cells doubled, and after a full course, there was an eight-fold increase. The end result is dramatic benefits for stroke, head and spinal cord injuries, diabetic ulcers, slow-healing wounds, burns, autism, addiction, and a broad range of other conditions.

There are recordings of the use of increased atmospheric pressure for healing purposes that date back as far as the 17th century. In England, practitioners used metallic vessels, along with pumps strong enough to compress air to treat patients who suffered from a variety of medical problems, such as chronic conditions. In several European countries in the 19th century, hyperbaric chambers were used to expose patients to slightly pressured air to increase blood flow, then it became a spa practice to treat many different issues. The idea that increased air pressure could be used to treat different maladies in the human body is by far a new one. Doctors, scientists and practitioners have been using this method for at least a few centuries.

The main benefit is helping the body get back the tools it needs to heal itself. Through the oxigenification of the blood, the body can reach the oxygen levels necessary to heal damaged tissue. Hyperbaric oxygen therapy can improve people’s quality of life and set them on the road to recovery other medicine treatments simply cannot achieve.

Mice were placed in pure oxygen under 3 atm for 1 h/day for 14 days after the removal of a segment of the left femoral artery. HBO-treated mice showed better functional recovery and greater blood flow in the ischemic hind limb than untreated mice. Histological examination revealed unatrophied muscle fibers with islands of small regenerating muscle cells only in HBO-treated mice. Regeneration of muscle was confirmed by the increase in myf5 mRNA. The amount of mRNA for vascular endothelial growth factor (VEGF), hepatocyte growth factor (HGF) and basic fibroblast growth factor (bFGF) was slightly increased in the ischemic hind limbs. HBO eliminated the increase in VEGF mRNA. In contrast, the amount of mRNA for bFGF and HGF was further increased by HBO treatment. HBO transiently increased early growth response protein 1 (Egr-1) in the ischemic hind limbs . https://www.ncbi.nlm.nih.gov/pubmed/17322643/

It wasn’t until the 20th century that the use and validity of hyperbaric chambers started to be questioned by mainstream media. A doctor named Orville J. Cunningham constructed a six story, 64 meters in diameter hyperbaric building in Kansas City. To date, the largest hyperbaric chamber ever constructed in the world. He would treat patients with a broad variety of aliments. He believed that he could treat diseases such as hypertension, uremia and cancer using air compression methods. Ultimately, he was censored in 1930, by the American Medical Association, allegedly due to lack of evidence that the treatments offered by Dr. Cunningham actually worked on the diseases he claimed. His building was destroyed and broken up for scrap metal to use in World War II. Since then, the use of hyperbaric oxygen chambers has been greatly debated.

Nowadays, hyperbaric chambers are most commonly used to treat and alleviate a series of diseases, like decompression sickness, carbon monoxide poisoning, arterial gas embolism, anemia, gangrene, radiation injury, among other conditions. However, recent studies have suggested that hyperbaric chamber therapy can be very effective to treat alcoholism, and possibly other drug dependency problems. The long term abuse of substances such as alcohol and drugs damages the brain, and affects thought process and decision making abilities. Overwhelming evidence indicates that hyperbaric chamber therapy can deliver oxygen to the damaged areas in the brain, increasing the blood flow and supplying nutrients the body needs to repair itself.

In one study, made by the Jubilee Mission Medical College and Research Institute, took a total of 30 male patients, between the ages 20-60 with alcohol dependence who presented withdrawal symptoms and delirium tremens on admission or during the course of the study. The subjects were divided into two groups, a treatment group, that underwent the hyperbaric oxygen treatment for 90 minutes a day, during a time period of 10 days; and a comparing group who was administered a placebo of the treatment for the same amount and period of time. The results were promising, the treatment group recorded a considerably faster recovery from withdrawal symptoms and delirium tremens than the comparing group.

In 2005, the American Academy of Pediatrics, made a publication describing the quantification of neurocognitive changes, before, during and after hyperbaric oxygen therapy in a case of fetal alcohol syndrome. “Fetal alcohol syndrome (FAS) is the most common non-hereditary cause of mental retardation, with deficits in general intellectual functioning, learning, memory, attention, and problem-solving.” writes Kenneth P. Stoller, MD. The study involved a teenage male patient, his neurocognitive abilities were measured throughout the process. Memory, reaction time and visual motor speed were compared during and after the 40 session treatment. The patient’s performance results revealed to have improved in all the criterias considered: language, memory, reaction time, impulse control, visual motor speed and visual memory, other subjective symptoms were greatly reduced. The fifteen year old was subjected to 33 additional sessions, which only continued to improve his social, cognitive and motor abilities. These scientific findings are further evidence that hyperbaric chamber therapy can be used to treat a variety of maladies and diseases.

All patients manifested clinical improvement by the 40th cycle of HBOT. The median number of stool frequency dropped from seven motions/day (range=3–20) to 1/day (range=0.5–3), which was significant (z=−4.6, p<0.001). None of the patients manifested persistent blood passage after HBOT (z=−3.2, p=0.002). The severity index significantly improved after HBOT (z=−4.97, p<0.001). Histologically, a significant reduction of the scores of activity was recorded accompanied by a significant increase in the proliferating cell nuclear antigen labelling index of the CD44 cells of the colonic mucosa (p=0.001).  HBOT is effective in the setting of refractory ulcerative colitis. The described protocol is necessary for successful treatment. HBOT stimulates colonic stem cells to promote healing.  https://www.ncbi.nlm.nih.gov/pmc/articles/PMC4860723/

As previously established, hyperbaric chamber therapy has been proved to reduce the symptoms of withdrawal and delirium tremens in both alcohol and drug addiction. Through this therapy, the body is provided with a much needed extra dose of oxygen which allows cell regeneration, this increase of oxygen in the body gives if the ability it needs to heal the tissues damaged through substance abuse. Used simultaneously to other holistic rehabilitation therapies, hyperbaric chamber therapy can greatly stimulate symptom alleviation and help recovering addicts return to a pre-substance abuse state of body and mind

This form of therapy has also been used to treat post-traumatic stress disorder. A study done by the Department of Medicine in the Chicago College of Osteopathic Medicine, along with the Department of Hyperbaric Medicine in the Swedish Covent Hospital in Chicago, IL, revealed interesting results on a 27 year old man that was treated to hyperbaric therapy for crush injuries and a non-displaced pelvic fractures caused by a bicycle to car traffic collision. The young man’s neuropsychiatric symptoms were significantly reduced after the first session of hyperbaric oxygen treatment, changes were surprising and visually obvious to doctors and the patient himself. It was recorded that complete cognitive and psychiatric recovery was achieved by the final oxygen treatment session. The patient underwent seven prescribed sessions for his injuries, which ended up curing his PTSD symptoms. Doctors concluded that the therapy meant to heal the injuries endured in the traffic incident reduced cerebral oxidative stress, inflammation, vasogenic edema, and hippocampal neuronal apoptosis which cause the disorder in the first place.

It has been stipulated that hyperbaric chamber therapy can also be used to treat depression and anxiety. The Department of Psychiatry, in the First Affiliated Hospital of Zhengzhou University, Zhengzhou, China developed a study that examined patients with spinal cord injuries. In this study, 60 patients were divided into three groups, 20 received hyperbaric oxygen therapy, 20 received psychotherapy, and 20 received conventional rehabilitation methods. The therapies lasted a total of 8 weeks: once a day, 6 days a week. Depression, anxiety, nerve function, daily living activities and functional independence were evaluated before and after treatment on all patient groups. After the treatments were finalized, the hyperbaric chamber group and the psychotherapy group both exhibited significantly lower depression and anxiety levels. This investigation proved that hyperbaric therapy can greatly reduce depression and anxiety much more efficiently than conventional rehabilitation therapy. Furthermore, it was proven that hyperbaric oxygen therapy cannot be substituted to improve nerve functions and daily living activities in patients. Infusing the body with much needed oxygen pumps greatly improved the state of the spinal cord injuries in the patients observed, as well as reduce their depression and anxiety spectrums.

There is also evidence that oxygen therapy can be used to treat traumatic brain injuries (TBI), common in athletes who practice contact sports. Traumatic brain injuries are caused by repeated or even a single strong blow to the head. TBIs have a series of physical, psychological, sensory and cognitive effects, some can appear immediately after the blow, other can take days or weeks to appear. Physical injuries include bruising, bleeding, headaches, loss of consciousness, nausea, sleeping and speech problems, among other serious effects. Psychological and cognitive effects include memory problems, inability to concentrate, mood swings, depression and anxiety. People who suffer from TBI are often left with cognitive, behavioral and communication disabilities. There is no definite way to treat TBI, as of yet, but there have been recent studies that show promise in the use of hyperbaric chamber therapy to train these brain injuries. If the principle of the therapy is an indicator to go by, which is to allow oxygen to flow in the bloodstream more efficiently and enable the body to heal itself faster and more efficiently, then there is promise that the increased tissue oxygenification, inflammation suppression and promotion of neurogenesis can reduce the effects of the injury, and improve the lives of people who suffer from TBI. 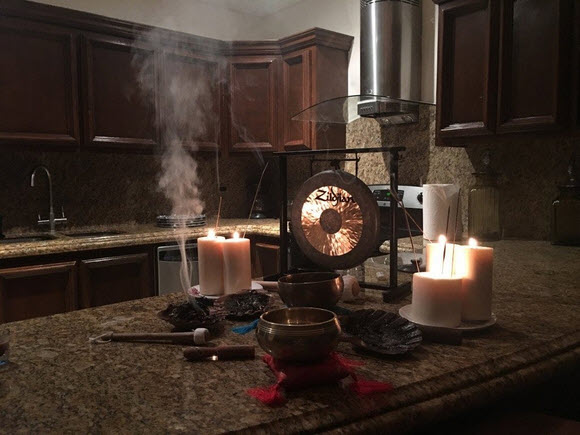 What Should Parents Know About Teen Addiction Rehab